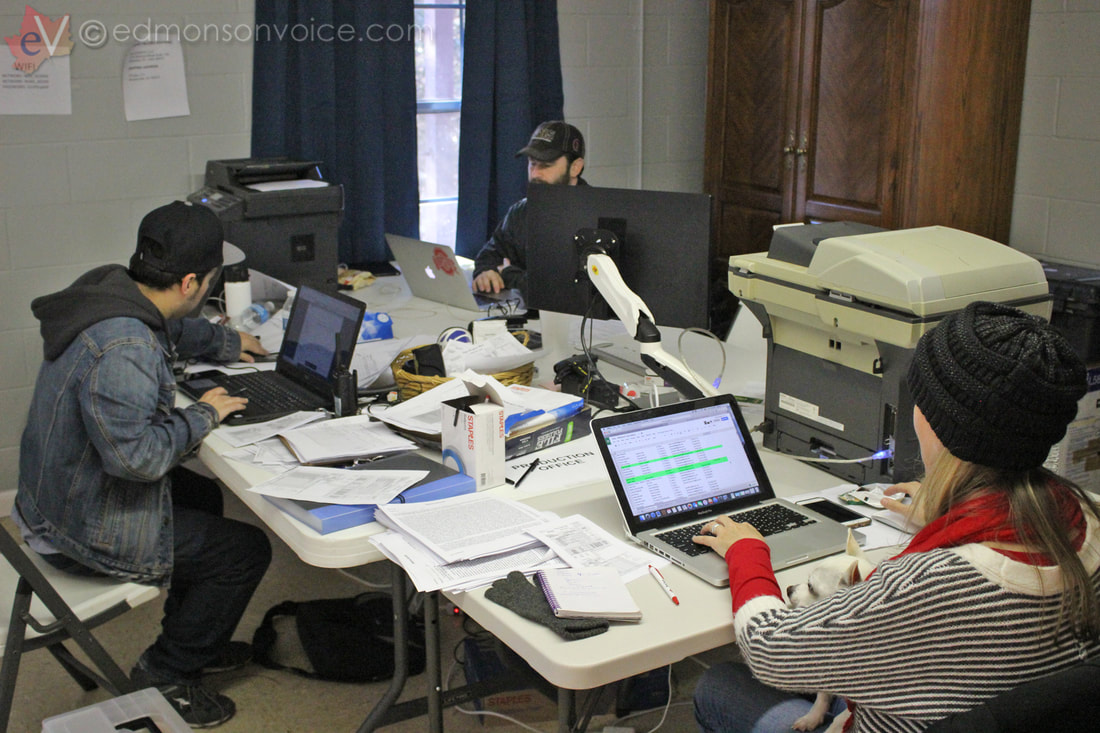 Production crew members from "The Prayer Box" movie work at a temporary command station at Camp Joy.
Darren Doyle, story and photo: Film still shots courtesy of Almost Never Films:
With only one day of filming to go, team members from "The Prayer Box" say they've been welcomed into Brownsville and Edmonson County like no town before. We had a chance to sit down with Michael Wickham, better known as "Wick," from Almost Never Films, the production company behind the movie.

"In L.A., it's all about 'where's my check,' but not here. Here, it's more about the experience," said Wickham. He is the line producer of the film, who is in charge of the budget and efficiency of the production process. He says his role is the "behind the scenes of the behind the scenes."

Of course, he's still writing checks in Edmonson County, but he said the hospitality of the local community has made the process much easier for his crew.

"We couldn't have done what we've done so far without the overwhelming support of this community. The overall hospitality has been incredible."

Wickham said that the idea of filming in the county was pitched to them by Rhonda Clemmons and the SOKY Film Commission. Through tax incentives that KY offers filmmakers and being a centralized location for their Nashville and Louisville crew members, they chose one of the few county seats in America without a single stoplight for the location of their movie, Brownsville, Kentucky.

"You guys had everything we needed for our film except a hospital and we were able to get that done at Twin Lakes (in Leitchfield). We needed a pool hall, a church, a food mart, and houses. We found all that here. It's a good thing we didn't need a stoplight," he said with a laugh.
​While Brownsville has been the smallest town in which he's ever worked, and they've limped through poor internet and cell phone service, Wickham said the process has been a "positive feedback loop."

"Because this town has been so good, it's helped us really enjoy this entire process and we've tried to put that positivity back into the town."

One of the film's stars, Reginald VelJohnson, better known as Officer Carl Winslow on the hit 90's ABC tv show "Family Matters," and Sgt. Powell from the "Die Hard" franchise, also sat down with us and talked about the very same hospitality.

When asked about the film's budget, he didn't give specific numbers.

"It's independent filmmaking, you know. It's not the Avengers, but it's not a student film. It's the type of film where things are tight. We'll get scrappy. Everyone is covering multiple jobs and we have to work together."

Within 30 seconds, another crew member asked Wick for a credit card. "We need a garden hose," said the crew member.

"See? We go from one thing to buying garden hoses," Wick said with another laugh.

He couldn't say enough about Edmonson County's own woman of many hats, Rhonda Clemmons. Rhonda serves as local Chamber Director, Executive Director of Tourism, she helps with the county recreation and room taxes, and she's pretty much got a hand in anything in the county where an extra one is needed.

"She was insanely instrumental in the process of us coming here," he said. "She wants to see us succeed and she's taken so much initiative to help in so many ways. We couldn't have done this without her help. As some of our guys were talking at your Chamber dinner recently, we all felt like we've been stuck in a Beach Boys song because we all keep saying, 'help me, Rhonda...help, help me Rhonda.'"

Wickham said that his crew has six more films to make and while there are many pieces that have to fall in place that help decide where those will be filmed, he's optimistic that they'll be back in the area. "We'd be silly not to try."

Filming is supposed to wrap on Wednesday then it's off to post-production. It could be around six months before the film is complete and ready for distribution, but Wickham said he's hoping to have a private screening in Brownsville for locals before the movie's official release.